One question I ask myself whenever I introduce the AoA kids to new experiences is, “How much do I share?” I could share nothing, and just hope that all of the disability characteristics stay hidden for the time they are involved with other people. This doesn’t seem fair to those who work with them. Will the characteristics always come out? Kids with seizures or peanut allergies don’t show their areas of difference all the time, but we would be negligent not to inform caregivers, and hope for the best.

With the AoA kids, I know that after working with them, caregivers would know something was different, they just may not know what to call it. Both kids have been said to be selectively mute. Little AoA is rising above this some, with a lot of support and encouragement. The intense anxiety around animals is another thing. Little AoA has full on panic attacks when a dog or a cat appears in her line of sight. Most people where we live, have pets. I feel bossy, suggesting that people hide their pets…but it is only a suggestion. I realize that ultimately I can’t control other people’s pets. I think it is fair that they are made aware of the likelihood of having to deal with a panic attack, and what to do, “just in case”.

With Brother, it is the dissociating that throws people off. Much like panic attacks, it is triggered by an experience, then a self-defeating thought. He starts staring blankly, and freezes. He doesn’t respond. This may last for a few minutes, 15 minutes, or more. It looks like he is in a trance, and one wants to just clap their hands and watch him snap out of it….

Unfortunately, that doesn’t work. He may stay frozen until the activity ends, or until he is excused to leave. Many people have tried different techniques to bring him back from this state. I have found that even if I do tell people ahead of time, that doesn’t really prepare them. 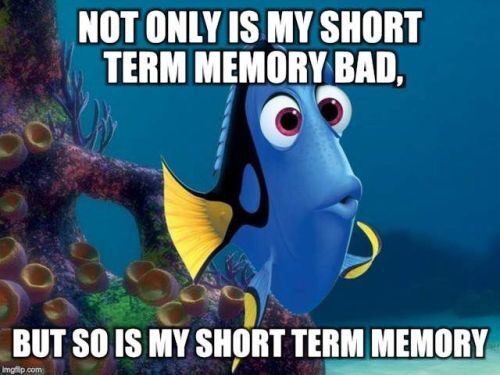 Short term memory loss is another challenging characteristic of Little AoA. The movie “Finding Dory” does a pretty good job of representing this. While it is kind of cute in the movie, in real life it is frustrating. Little AoA responds with,”I forgot”, quite a lot. Her army of angels works with a lot of repetition and hands on learning to try to move information into her long term memory so it can be retrieved.

One of the best things we have done that helps EVERYONE, is to put up dry erase boards for each family member. On Sunday evenings, I go to each board and write the activities for the week. It definitely eliminates the constant question,”Now what do we have to do today?” Every week there is therapy, tutoring, music lessons, and then the grandparents have doctor appointments. Little AoA is the most proactive with the scheduling and keeping everyone straight. Brother needs time to mentally adjust and wrap his mind around activities. Rarely do we act on a whim, and do something spontaneous.

Spontaneity is something to work toward with the kids. I must say that when “Pokémon Go” first appeared, it was encouraging us to go on little adventures. It was pretty short lived as a passing fad. I look forward to more adventures!